My organization, Carolina Basketball Association (CBA), was established with a goal of holding local basketball tournaments for the benefit of kids not participating in high level AAU travel teams. From what I have observed there are many high level athletes in South Carolina who are missing opportunities to play and improve their games.

Jack Greathouse and I came from the same hometown, Parkersburg, West Virginia, but took different paths teaching kids how to play basketball the right way. Jack was a highly successful high school basketball coach and principal in Ohio.

As for myself, I went into the business world while volunteering to coach youth basketball. In 1989, I begin to coach AAU basketball, then in the early 1990’s, I was instrumental in bringing YBOA into West Virginia serving in the role of assistant state director. Soon I was attracting and developing talent to qualify for the Nationals plus taking teams to College recruiting tournaments.

In the early 2000’s, while seeking other tournament venues for my AAU teams, I ran into Jack Greathouse, who had help start Ohio Youth Basketball (OYB). After I learned a little bit about the structure of OYB, I went to two of the local high school coaches with the goal of bringing an annual tournament to Parkersburg, West Virginia. Once they saw the advantages as a weekend fundraiser, the high school coaches at both Parkersburg High School and Parkersburg South High School were on board. This past spring they held the 14th Annual Mid Ohio Valley tournament, which brought in teams, ranging in age from 10 and under up to high school, from both Ohio and West Virginia.

When Parkersburg High School selected a new basketball coach, one of the first things he did was approach me to take over his off-season program. (West Virginia has a rule, team compensated coaches cannot work with their teams in the off-season). Additionally, we set up a developmental program starting with fifth graders up through the high school team getting play beyond their school league games. As this Parkersburg High School team developed, I took them to AAU tournaments and coached them in summer league programs for nine years.

When my daughter graduated high school, my wife and I moved to South Carolina. Watching high school basketball, I realized there was an unfulfilled niche to develop the basketball players, below the highest AAU level. When Jack moved down to South Carolina, I immediately contacted him to partner with me to begin running tournaments in the Southeast to give basketball players and coaches opportunities to play more frequently in local tournaments. Jack and I believe this will allow players to improve playing games while working with their own coaches or selected coaches. 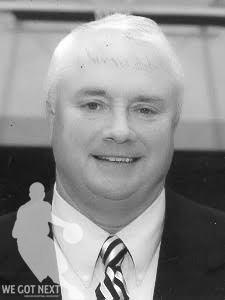 I am thrilled to be partnering with Don Kesterson on the development of the Carolina Basketball Association ( CBA ). I have spent nearly 40 years working with young people and coaches who are passionate about basketball and taking their roles to higher levels. As a coach at the collegiate level and the high school level I truly believe there is a need and place for the Carolina Basketball Association. Greathouse has coached High School Basketball in both West Virginia and Ohio for 23 years and won well over 300 games while helping rebuild three programs. Greathouse has won several coach of the year awards including the Ohio high school coach of the year in 2003. Among his accomplishments includes being selected to coach the Ohio -Kentucky, Ohio-West Virginia, State Ohio North/South games. He was also selected to coach the Ohio team Reebok 19 and under games near Milan Italy.

"I 100% believe in Don Kesterson and our mission to make an impact on youth basketball in a positive way in South Carolina." -Jack Greathouse